Thanks so much for the link to my blog from How to Cope with Pain, who made this original photojournal challenge. 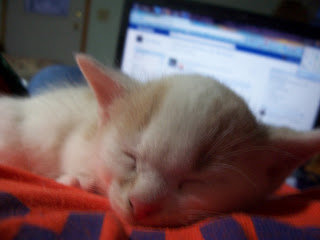 Yes, our family has two new members.  After my mom brought home a tiny calico kitten, it was decided that she was “lonely” and needed an age-appropriate playmate, as our adult cats weren’t too fond of her.  So we went back to the house to pick up another kitten.  Since the calico is my mom’s, this is my kitten, so I would like to introduce to you “Ike,” named after the nickname of President Dwight D. Eisenhower (above) and “Daisy,” my mom’s calico (below). 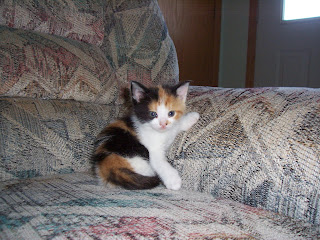 Why Ike?  Because this sweet little kitten is the grandson of my favorite cat who passed away 2 years ago at the ripe age of 15.  Roose (short for Roosevelt) was a black and orange tortiseshell.  When she had kittens, the lady that worked with my mom took one and named it Ginger.  That cat had a litter of kittens, one of who was named Moose.  Well, February 29, Moose gave birth to a litter of kittens, including the calico named “Daisy” who my mom now owns.  And on March 2, Ginger gave birth to another litter of kittens, including Ike.  So the two kittens are Roose’s grandson and great-granddaughter, and are named somewhat after her with Ike being named after a president (Roosevelt) and Daisy of course being a flower (rose).

Update: Unfortunately, I had sad news, both Ike and Daisy have passed away since this blog post.  They will be missed.  Now we have Ike’s brother, Tyler, living with us and are praying he will continue to live on in memory of his grandma, brother, and niece.